On the 21 July 1905 the US gunboat USS BENNINGTON suddenly exploded at around 10.30am while lying at anchor in the San Diego harbour.

The total number of persons killed was 62 and one was Frank DE CURTONI, a native of Nelson, New Zealand.

He is buried at the SAN FRANCISCO NATIONAL CEMETERY, CALIFORNIA: -

The following is from a newspaper report of the time: - Frank came to America around 1892, and took residence with his uncle J DE CURTONI, a grocer, about 1898. He enlisted in the US Navy and was assigned to the YORKTOWN when that vessel was in the Phillipines. He was afterwards transferred to the OREGON and upon his second enlistment three years ago he was detailed to the Bennington. Four sisters, Lillian and Elizabeth CURTONI, Mrs P HARDING and Mrs A BURTON, and two brothers, Edwin (residing in San Diego) and Louis (Engineer on the transport LOGAN and formerley of the cruiser OLYMPIA) - survive him. At the time of his death Frank was 29 years old.

However I received the following information from a relation: -
1/ Frank's Uncle was not J De Curtoni but Frank De Curtoni. He was also treasurer of the Servian Montenegrain Society in San Francisco.
2/ One of Frank's married sisters names is not correct. How the reporter got a Mrs A Burton I don't know, as this sister was my great grandmother and she was Mrs N J Wakely. (nee Annie Alice De Curtoni).
3/ The residence of his brother, Edwin, was not San Diego but San Francisco.
In NZ the De Curtoni name was spelt as De Cartoni or just plain Cartoni. I have just stuck with the USA spelling. You may be interested to know that Frank's older brother, Louis, referred to in the article above, also lost his life at sea in another disaster on the night of 27 Jan 1916 off Ocean Beach, San Francisco. Louis was Chief engineer on the Oakland garbage scow "Aberdeen" which was wrecked. All aboard were lost and the bodies never found.

The photos are of the Bennington Memorial in Bennington, Vermont. It is located at the Town Office Building on the front lawn. Thanks to Joseph L. Pires, the USS Bennington Ship & Website Historian, Cape Cod, Massachusetts. 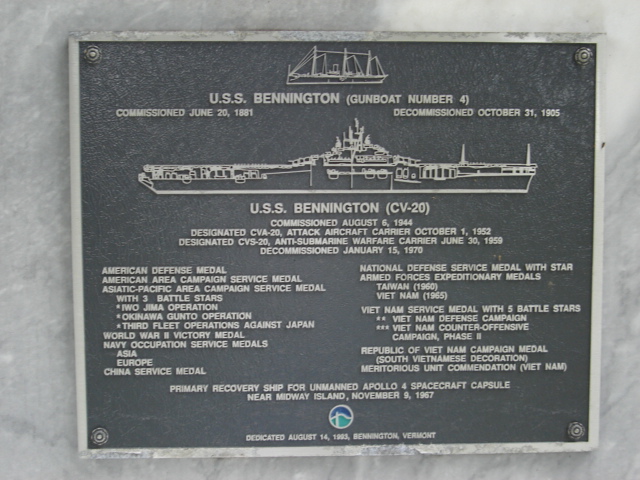 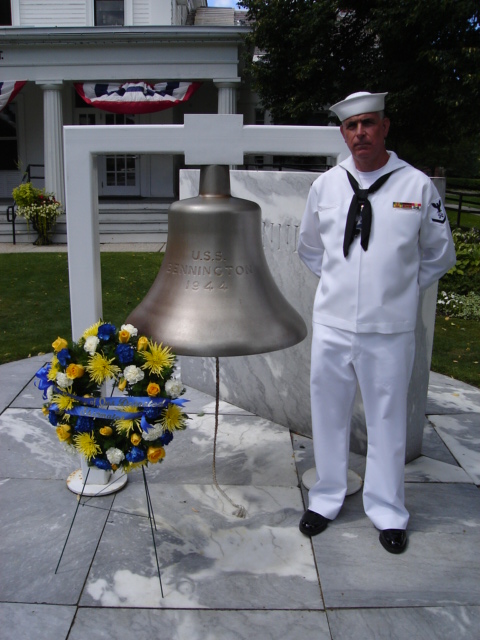